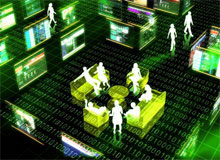 Google calls today’s modern digital consumer Generation C. This generation is not bound by an age demographic, instead they are bound by their use of digital media, social media, and online video (heavily YouTube of course).

Generation C's mindset is characterized by its devotion to creation, curation, connection, and community. They drive popular culture with photos, videos, memes, and mash-ups.

Before you dismiss Generation C as an undesirable demographic to target, listen to this: they are responsible for influencing over half a trillion dollars in spending per year.

While 80 percent of millennials belong to generation C, this mindset is truly cross-generational, and includes members from Generation X and the Boomer Generation too. In fact, because of this generation’s digital tendencies, they open up new advertising opportunities.

Gen C is not a demographic — it’s a state of mind.

They’re the people who live digital. They spend more time online than they do watching TV.

Gen C is a taste-maker

Made up of early-adopters, they set the trends that the rest of the population will soon follow. They also rely heavily on peer approval before making buying decisions.

Almost 90 percent of Gen C has a social profile, and 65 percent of them update it every day.

They watch mobile video on desktops, tablets, and their smartphones

They value conversation that aligns with their interests, and they aren’t opposed to ads that are relevant to them.

When you remove Google’s sales pitch for YouTube you’re still left with a compelling description of today’s modern digital consumers. These are the same consumers we connect with on behalf of dealerships across the country.

These consumers spend huge amounts of time on screens other than TV. They are mobile masters, using tools from Google, Facebook, Twitter, Tumblr, Flickr, and YouTube. They may not know where their television remote is, but they definitely know where they can get online.

Their “water-cooler moment” is a link, a tweet or a tag. Instead of reaching them with a TV buy, you’re better off with pre-roll video and display advertising like retargeting or data-driven advertising like pixel targeting.

Learning to connect with Generation C will become more and more important throughout the next year and in the future. Remember, Generation C is a group of early adopters. As they go, goes the rest of the population. You want to make sure your advertising is primed to keep up.

Dave Pavlu is the founder and CEO of AdsUpNow.com. A full-service digital marketing agency based in Seattle, WA specializing in online marketing strategies that drive and capture first-party leads for car dealerships.